Outdoor Recreation NI / Who We Are / Our Board

We are committed to maintaining the highest standards of governance across all areas of our work. Our voluntary Board of Directors is responsible for our strategic development and governance oversight. Well known for the first Irish ascent of Mount Everest in 1993, Dawson is a mountaineer with a strong affinity to the natural environment. He is widely respected for his insightful and balanced views. An architect by profession, Dawson is a past Chair and current board member of Mountaineering Ireland. Reg spent his career in the private sector retiring early from the position of Senior Computer Project Manager in a large international manufacturing company.

He has a life-long interest in the outdoors. His voluntary involvement has included Chair of Hostelling International NI, Chair of the Ulster Federation of Rambling Clubs, and assisting with Duke of Edinburgh expeditions. He is currently a Ranger with Outdoor Recreation NI. He served as the Chair of Governors of a large Belfast Grammar School for many years and as a Governor of a Belfast Primary School.

Reg is a regular hill-walker in NI and Europe and has completed many of the long distance trails in the UK. He is an ardent traveller having visited over 140 countries to date. He is a keen outdoor walker with a lifelong interest in young people and holds a number of volunteer positions within the Scout Movement.

Maynard has a continuing interest in fitness training, has an interest in cycling and is a member of several cycling groups. 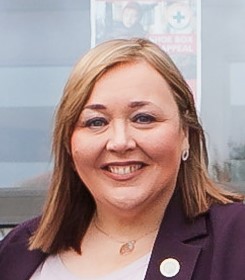 Fiona is a native of Belfast, educated at Queen’s University where she first completed a BA Honours in English Language and Literature and a PGCE in English, Drama and RE.  She also holds a Masters of Education in Leadership and Management from the University of Ulster.  Fiona is an Associate Education Advisor and a Fellow of the Chartered Council of Teaching.

Her first teaching appointment was as a teacher of English and Drama in De La Salle College, Belfast, a large (1200 pupils) all boys, non-selective and all ability comprehensive school.  For the last 18 months of her service, she was Acting Principal.  During her time in De La Salle College, Fiona successfully led the school through the Investors in People Award and the Inclusion Quality Mark.

She was appointed Principal of Lismore Comprehensive in Craigavon, a large (1200 pupils) co-educational, non-selective and all ability comprehensive school in December 2013 and took up post in April 2014.  During her time at Lismore, the school was announced for a capital build, the development of which Fiona led until taking up her current post.

She was appointed Principal of St Ronan’s College in Lurgan, a large (1850 pupils) non-selective, co-educational voluntary grammar school in January 2020 and took up post in March 2020 two weeks before the first Covid-19 related lockdown.

Fiona is passionate about reading, lifelong learning and the pursuit of educational excellence as a means to removing social and other barriers for young people.  Like many people, during the lockdown periods associated with Covid-19, Fiona re-engaged with the great outdoors and has enjoyed plenty of walking in nature across Ireland since.

She lives in Moira with her husband, two children and their dog.