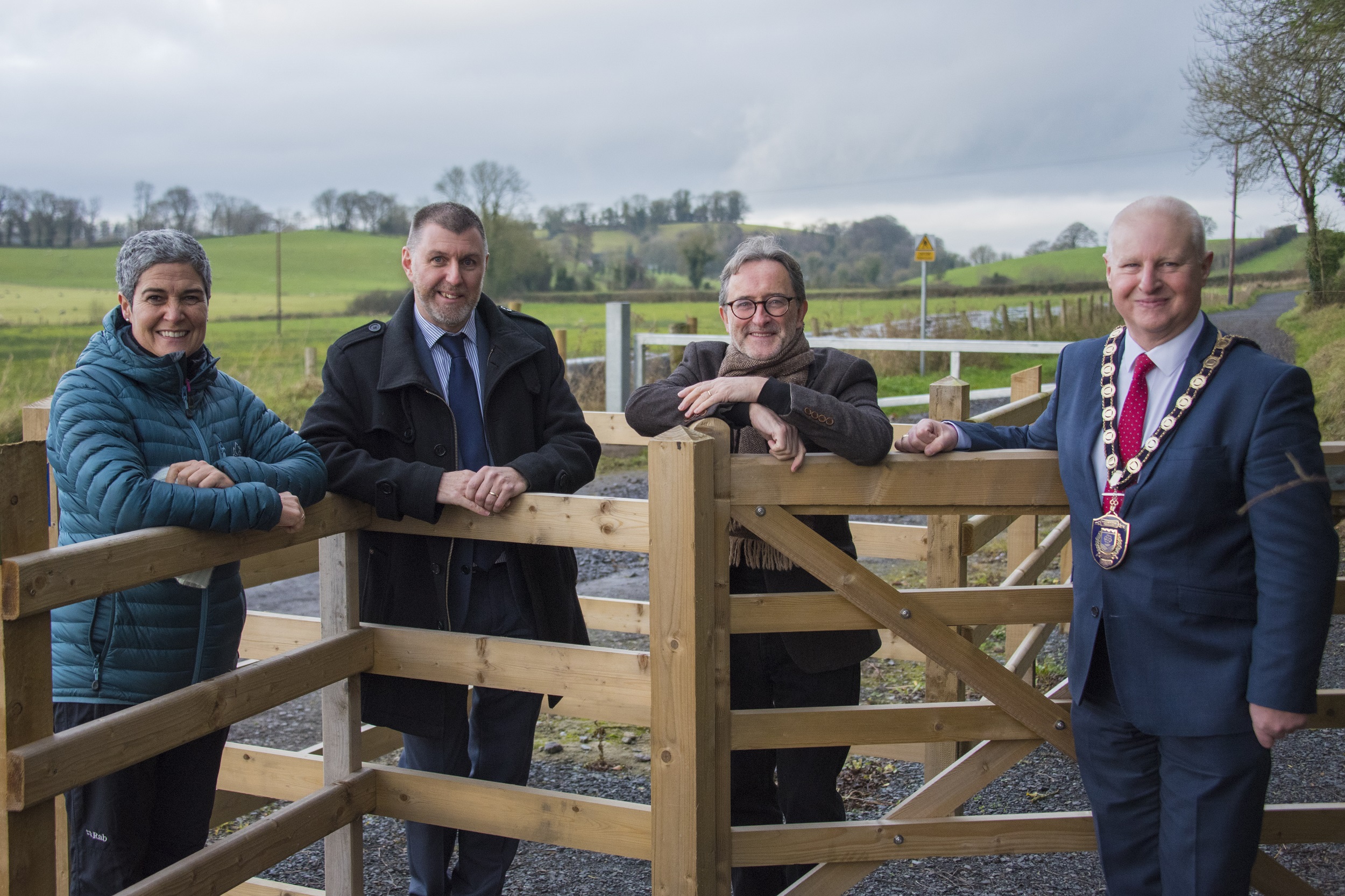 The achievements of the ‘Cuilcagh to Cleenish: A Great Place’ (C2C) project were celebrated on Tuesday 14th December 2021 along with the launch of two new community walking trails in the area.

The innovative partnership project was community-led from the outset with the key concept and activities identified through consultation with local community groups. The three-year project which concluded in September 2021 delivered a wide range of heritage activities including ‘Going Underground’ (a concert in the Marble Arch Caves), shared education projects with local schools, development of a Memory Map, delivery of community archaeology and history talks, all with the aim of creating a connected place where local people are proud of their history and culture and where visitors are attracted to visit and explore.

The C2C project received £270,000 of funding from The National Lottery Heritage Fund with additional funding by Fermanagh and Omagh District Council and Outdoor Recreation Northern Ireland.  The Heritage Fund’s investment was made possible through the National Lottery’s ground-breaking Great Place programme, with C2C successful in being one of only four projects to receive funding in Northern Ireland.

Significant funding for the unique community-led project which connected the communities of Cleenish, Bellanaleck, Arney, Killesher and Florence Court through the rich heritage, history and culture of the area has been made possible by National Lottery players who raise more than £30 million every week for good causes in the UK.

“The Great Place programme has put heritage and culture at the heart of the local vision and ambition for the community by enabling strong new partnerships between heritage and other local agencies. It recognises that what makes people and communities thrive is a sense of involvement, identity and belonging. From experience, we know that those connections often grow most powerfully when people take part in local activities and when they relate confidently to their own culture, history and heritage. We were delighted to support the Cuilcagh to Cleenish project and the Arney Battlefield Trail because it actively supported communities to connect to their heritage and create a trail that local people and visitors can experience and enjoy.”

A key output of C2C is the development of two community walking trails which are exemplar community-led outdoor recreation developments providing ‘doorstep’ walking opportunities connecting communities to their built and natural heritage assets. The trails were delivered in partnership by the C2C project and Fermanagh and Omagh District Council through the resources of the Cuilcagh Lakelands UNESCO Global Geopark and with the valued support of nine local landowners.

The 1.9km Arney Battlefield Trail was funded by the National Lottery Heritage Fund and The Department of Agriculture, Environment and Rural Affairs’ (DAERA) Environmental Challenge Fund whilst the 3.9km Nixon Hall Trail was funded by DAERA’s Tackling Rural Poverty and Social Isolation Programme, and Fermanagh Omagh District Council via the Landfill Communities Fund.

Agriculture, Environment and Rural Affairs Minister Edwin Poots said: “This project is another example of how my Department develops partnerships and funds initiatives which benefit rural communities. The Cuilcagh to Cleenish enhancements will help in developing the area into a great place to live, work or visit.  These new trails which received a combined total of £128,000 from my Department’s Environmental Challenge Fund and the Tackling Rural Poverty and Social Isolation (TRPSI) Programme will open up a host of opportunities for locals and visitors alike. I want to congratulate Fermanagh and Omagh District Council, Outdoor Recreation Northern Ireland and the many stakeholders who have contributed to this project.”

“Projects like this are important in sustaining and improving the health and wellbeing of local rural residents, both young and old. These particular trails, with their paths and interpretation signage, will also raise awareness of the history of the local area.”

Speaking at the celebration, the Chairman of Fermanagh and Omagh Council Chair Cllr Errol Thompson highlighted the importance of the project to the area. “This award-winning project has truly demonstrated the strength of local communities working alongside one another for the benefit of an area. The project has enabled the local people to get involved in initiatives that helped bring about positive health and well-being benefits, increased community co-operation and economic rewards, elements which are at the centre of the Fermanagh and Omagh Community Plan 2030 and the recently launched Cuilcagh Lakelands UNESCO Global Geopark Development Plan.”

The C2C project was managed by Outdoor Recreation Northern Ireland (ORNI), a not-for-profit organisation responsible for developing, managing and promoting outdoor recreation in Northern Ireland. ORNI Executive Director Caro-lynne Ferris, expressed the organisation’s delight with the outdoor recreation opportunities that have been developed in the area “The ORNI team has thrived on the impressive attitude to partnership working in the area. The two walking community trails and the forthcoming Arney River Canoe Trail have only been possible through the joint-up approach of the local community, local landowners, statutory agencies, Fermanagh and Omagh District Council and a range of funders. We are delighted to leave a legacy that will enable the local community to connect with nature and their local built heritage.”

ORNI delivered the project in partnership with Fermanagh and Omagh District Council through the resources of Cuilcagh Lakelands UNESCO Global Geopark, Cleenish Community Association and Killesher Community Development Association. The key driver for the project was Barney Devine, C2C Local Coordinator “The local community’s appetite to engage with the project has been fantastic and has really provided the energy for everything that we have done. I feel we have put a previously overlooked part of Fermanagh on the map and provided inspiration for further community-led project with the wider Geopark.”