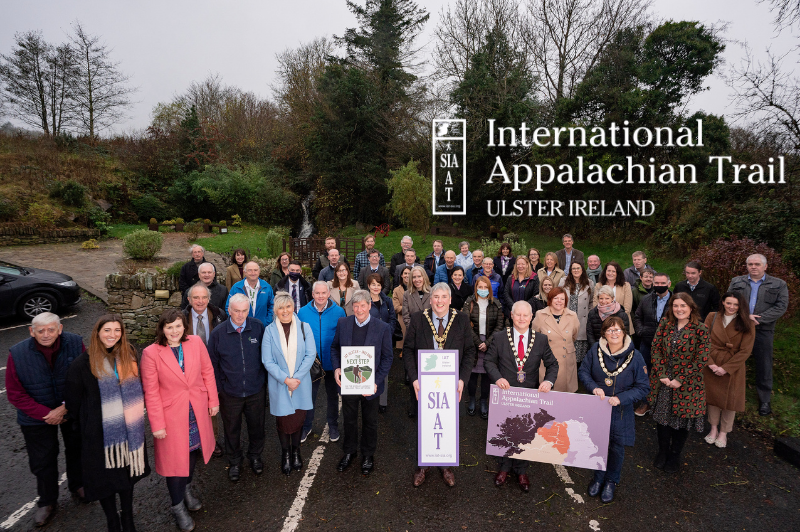 A major event has been held at the Mellon Country Inn in Co. Tyrone to mark the formal launch of the next phase of the Ulster-Ireland chapter of the International Appalachian Trail. The initiative is part of a cross border project funded by the Rural Development Programme 2014 – 2020 and being part funded by the Department of Agriculture, Environment and Rural Affairs (DAERA) and the European Union.

The International Appalachian Trail (IAT) Ulster–Ireland is part of a wider international walking trail that follows the Appalachian Mountain terrain, which existed on the super continent Pangaea before the Atlantic Ocean formed that broke up the continent.

Lead partner Derry City and Strabane District Council and their Local Action Group (LAG), in partnership with LAG groups from other Council areas are working to develop, enhance and promote the IAT Ulster-Ireland chapter of the International Appalachian Trail. This has resulted in significant improvements along its route recently in the form of newly installed pieces of art, new trail furniture and updated information panels and improved facilities at many locations.

The IAT Ulster–Ireland route is approximately 279miles / 485km in length and runs from west Donegal to Larne passing through six council areas. It starts at the spectacular Slieve League cliffs, passes through Glencolmcille, traverses the Bluestack Mountains in Co. Donegal before crossing into Co. Tyrone. Here it picks up the Ulster Way, taking in the Sperrins, the stunning North Coast and the Glens of Antrim. A significant marketing campaign will coincide with these trail works, promoting the walk to audiences across America, as well as in Northern Ireland and the Republic of Ireland, incorporating videos, photography and offers from local businesses. This campaign will be carried out by Outdoor Recreation Northern Ireland, an organisation with extensive experience in promoting walking trails to locals and tourists.

DAERA Minister Edwin Poots MLA commented, “I am delighted that through the Rural Development Programme 2014-2020 Co-operation scheme, my department has funded £700,000 towards the project costs of the Ulster chapter of the International Appalachian Trail. The cross-border project which has resulted in significant improvements across the entire route from West Donegal to Antrim will provide a quality walking experience attracting local and out of state visitors, providing a much need boost to the local economy.”

Minister Humphrey’s from the Department of Rural and Community Development added, “I am delighted that through the European Agricultural Fund for Rural Development in Ireland, we have been able to invest significantly in the International Appalachian Trail Ulster–Ireland.

This cross border project which has resulted in significant improvements in the route throughout Donegal and onwards into Northern Ireland provides real opportunities for growth in tourism for rural communities and highlights the beauty of the Irish landscapes available to us at home. I congratulate Donegal Local Development CLG, and indeed all of the LAG groups involved in the project across Northern Ireland, in delivering an ambitious project on the behalf of the rural communities in their areas”.

Lough Eske, Co. Donegal is along the IAT Ulster – Ireland

Founder of the International Appalachian Trail Dick Anderson said, “Congratulations to all of those involved with the Ulster – Ireland IAT project, for a great job with improving and promoting the trail. In the early days of this project I never imagined that I would be speaking with you today about the trail in Donegal and Northern Ireland…

Former Governor Joseph Brennan (once said) ‘This narrow trail… will serve as a reminder that the mountains and the rivers and the forests are our real heritage. Our common biological and geological bond. They will outlast us all and it is up to us to see that they’re health and grandeur can be enjoyed by all the generations of mankind that follow us…’”

To keep up to date with developments along the IAT Ulster–Ireland, search “IAT Ulster Ireland” on Facebook, Twitter or Instagram. You can also find more information about the trail by visiting www.iatulsterireland.com.

Notes to Editor
Northern Ireland LAGs
The Northern Ireland Rural Development Programme 2014-20 is part funded by the Department of Agriculture, Environment and Rural Affairs (DAERA) and the European Union. The funding is administered by Councils in Northern Ireland on behalf of Local Action Groups (LAGs) in each area.