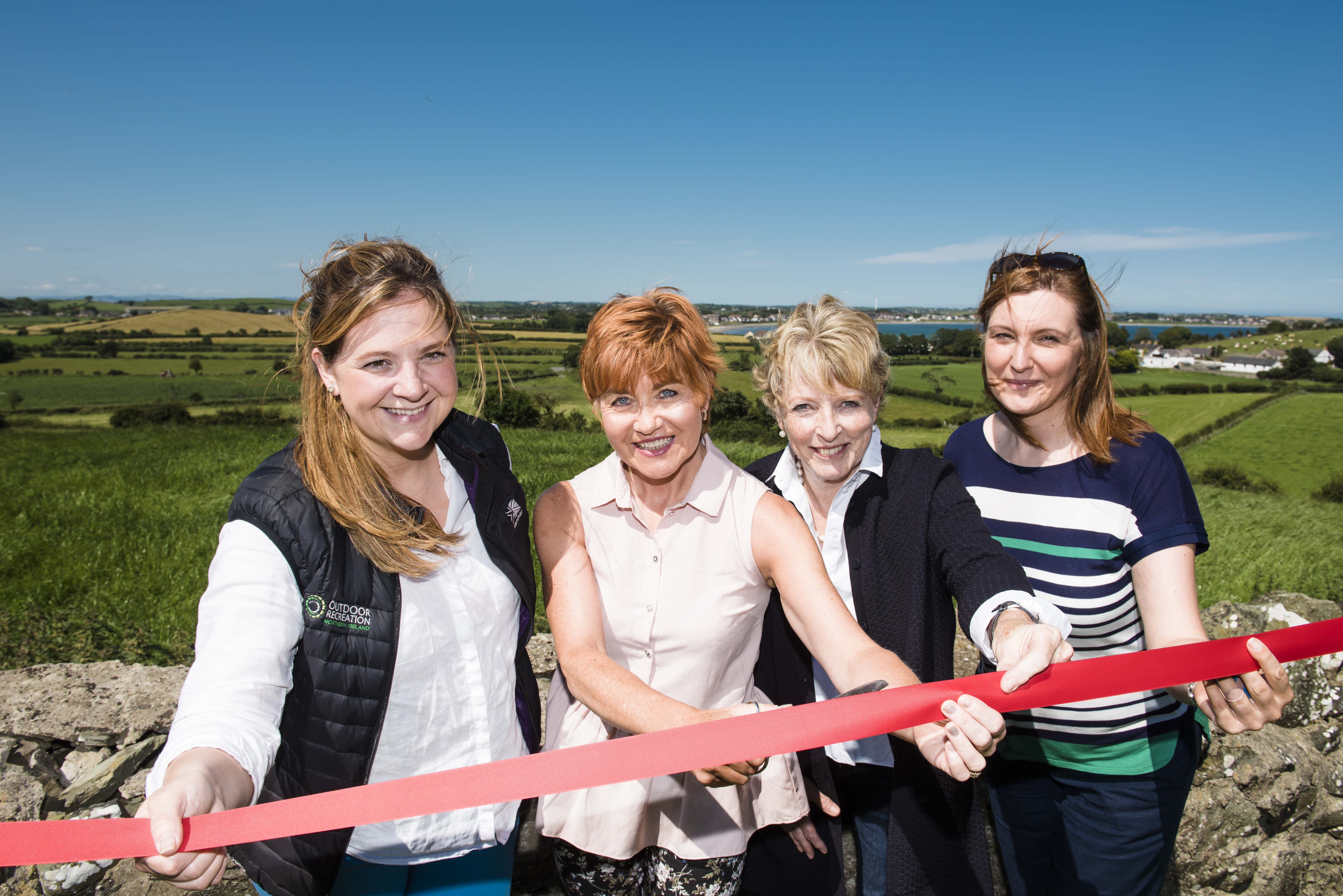 A new community trail has been officially launched to formalise public access to Slans Graveyard and its incredible panoramic views overlooking Cloughey, the surrounding countryside and coastline.

Jenny Ingram, Ards and North Down Borough Council Countryside Recreation Officer, expressed her delight at the new access to the locally important heritage feature, “It is an absolute pleasure to officially launch this trail providing access to even more of our beautiful countryside and local heritage.  There is no denying the spectacular, uninterrupted views and the Council is delighted to have played an important role in opening up this hidden gem for locals to enjoy and reconnect with the site’s historic past.”

A scheduled monument dating back to the first millennium AD, at one time Slans was the main graveyard for the Cloughey and Kirkistown area and the burial place for many sailors who lost their lives in the waters around the notorious North and South Rocks off Cloughey.

A collaborative effort, made possible through a variety of organisations and the goodwill of private landowners, Outdoor Recreation Northern Ireland (ORNI) delivered the project working in partnership with Peninsula Healthy Living Partnership, Ards and North Down Borough Council, Cloughey and District Community Association, Strangford Lough and Lecale Partnership and the Department for Communities Heritage Environment Division.

Peninsula Healthy Living Partnership; a voluntary, community based organisation with a passion for promoting healthy lifestyles part funded the project in conjunction with the Northern Ireland Environment Agency Challenge Fund and Ards and North Down Borough Council.

Commenting on the new community trail within the Strangford Lough Area of Outstanding Natural Beauty, Jenny Gingles, Chair of Peninsula Healthy Living Partnership enthused “We are delighted to see Slans Graveyard opened up for locals and visitors to the Cloughey area to enjoy. We are committed to improving health through partnerships and this project is a perfect example of how collaboration can lead to a positive outcome for the community and ultimately create opportunities for people to live healthier lifestyles.”

“We hope this will be the first step in a bigger vision of joint projects between Ards and North Down Borough Council and ORNI to provide even more community trails to get people outside and active, enhancing both physical and mental health.” Jenny continued.

The new community trail is one of nine priority projects identified in the ‘Ards Peninsula Community Trails Project’ commissioned by the Peninsula Healthy Living Partnership and delivered by ORNI.  Fiona Milne, ORNI Product Development Officer, shared Jenny’s excitement for the future potential of more trails in the area. “While Northern Ireland is blessed with an abundance of greenspace, there is often a lack of infrastructure to allow local communities to enjoy their local outdoors.  Community trails create doorstep walking opportunities by linking communities to green space via safe, off road routes and it is great to see the launch of the new access at Slans making this concept a reality. A key asset in the delivery of this project was the positive attitude of the private landowners, without such support the project would simply not have been possible.”

The 180m trail begins from the Ardminnan Road with access over an existing stone style and travels up the side of a field between the hedge and new fence line to Slans Graveyard where walkers can explore the historic site and learn of its fascinating history through a new interpretation panel. Taking in the views from Slans Graveyard